There’s not a lot to see in Lake Bolac, a pub, a store, an information centre. In contrast the crater lake is huge, about 27kms in diameter according to Toothless Johnno who drove around it.

The Camping Park is a few kilometres from town and far enough away from highway noise, situated in a well trimmed thicket of eucalypts. There are newly constructed combination toilet & shower bathrooms and fire pits and water taps scattered throughout the park. There is a cleverly designed BBQ shelter with views of the lake from comfortable chairs and there’s a table.

A family of magpies keep a close watch on the BBQ for tidbits, cormorants dry their wings on the rocky shore and coots and their babies swim back and forth endlessly.

Every evening the ranger drops by to pick up the fees and check on things. Being seniors it costs us a mere $12 per van which includes a wealth of information about farming practises and grain growing. We learn that the paddock beside us of spindly green stuff with brown fluff on top is canola drying out. When the weather is right they’ll push it into tight rows before harvesting. Who’d have thought that this ugly stuff was the golden glow that carpeted the state only a few months ago?

Being on Victoria’s volcanic plains this is a good place to explore other crater lakes and the many small hills that were once belching volcanoes. 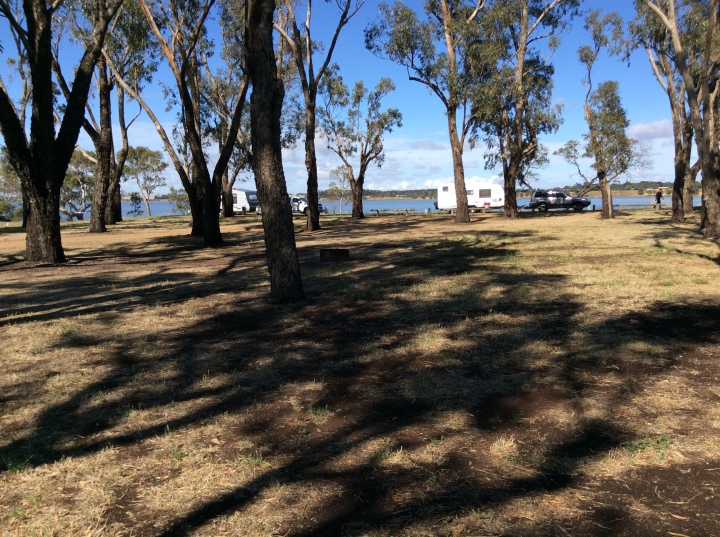