Time to pack up and move on. Yesterday Woody had complimented a council worker on the state of the local parks. She suggested that we check out Turkey Beach, so we leave the highway and detour 20kms to fishing shacks, mud flats and mangrove swamp. Perhaps we missed the delights of this spot as we aren’t fisherfolk and there certainly is a proliferation of tractors and boats here. The thing that does catch our eye though is the ‘container library’ in a cow paddock on the outskirts of town. Somebody did a great job of decorating it. 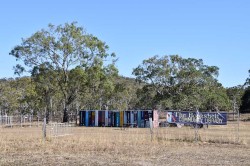 We stop and stretch our legs at pretty Miriam Vale. It’s a little town that really shows the world how to welcome RVers. They don’t have an overnight rest area but they do provide plenty of parking, toilets, playgrounds and parklands. There’s a charming old general store (which doesn’t have pineapple jam), several cafes and a handsome old wooden pub all of which make it worthy of a stop.

Driving into Agnes Waters and 1770 we’re gobsmacked at the growth of housing and holiday accommodation since we were last here 6 years ago. The 1770 Camp Ground looks pretty from a distance but it’s ‘sardines’ today and the campers are rolling in. Thankfully we booked a site a week ago.

We pay the cheery lady at the office and discover that our site and most of the others are ridiculously tight and the park is scruffy. Setting up is fractious to say the least. There are no site markers but it appears that there are meant to be 3 camps in the space of what we had in the unpowered section at Tannum Sands. We try our best not to encroach on our neighbours but a young dad and his son are right beside the kitchen,TV and toilet side of our van. They have brand new camping equipment and dad is teaching his son the joys of being in the outdoors, I’ll bet he didn’t expect to have 20 feet of caravan so close. Behind us is a camper trailer its occupants out for the day and there’s no room for our car.

The amenities block is modern and clean and beachfront sites are just that, on the beach. We’re in the second row on fine gravel, the stuff that tracks inside and gouges little nicks in linoleum floors like ours. To keep the stuff out we put a second outdoor mat down. Hopefully it will help to keep the dust and gravel outside. There’s no dump point, the nearest being in the parklands a few kilometres back up the road. Our double length of sullage hose won’t reach the nearest drain so we run it into the garden bed beside us. This upsets the manager and he suggests that we put a bucket in the garden then empty it regularly over at the drain. I know what the aim of this is but the garden looks as if it has forgotten what water is. What a shame we didn’t keep our holey bucket, that would have kept everyone happy!

The beach is an arc of golden sand in a bend of the Round Hill Creek and it’s a pleasant stroll to the spot near the river mouth where The Endeavour dropped anchor in 1770. Up a few steps there’s a cairn of river stones with a plaque declaring “Under the lee of this point Lieutenant James Cook RN landed on 24th May 1770”. I seriously doubt that the noisy family fishing from a tinnie in much the same spot would have such navigational skills as Cook.

The camper trailer behind us is a two storey Ultimate X 20, a very nice camper and the type usually owned by athletic folk, bushwalkers and the like. Our neighbours are in their 60’s and look to be under exercised and over refreshed, I’ll call them Elvis and Mona. When Elvis and Mona return home, Mona greets Woody with “You’ve parked on our site!” He explains that there is nowhere else to park and she lowers her hackles. Elvis seems quite happy with his lot but Mona whinges that she wants to go home (I don’t think she’s heard that it’s 3 degrees down in Victoria) and she’s sick of Queensland. Mind you I can understand her unhappiness as she doesn’t have the body for climbing the ladder in and out of the camper day in day out and neither could I. She goes on to complain that our tap will flood their site, but hey, nearly all camp taps leak and drip.

Just when we think we’ve resolved the car park issue, Elvis moves his vehicle and blocks ours in.

It’s a short stroll along the tree-lined boardwalk to the pub where a crowd has gathered to watch the sun set over the estuary. A daily event here that never fails to please. Boats, old and new, pelicans, sand bars, fishermen and swaying palms complete a picture that dreams are made of. We book a table for dinner and enjoy a plate of fish and chips. When we had arrived Woody had lamented that we didn’t bring a torch for the walk home but no matter its boardwalk all the way.

We cross the road after dinner and I turn to take a photo of the pub all lit up, woody suggests a better angle and as I step onto the road I trip over a rubber parking barrier on the ground. I hit the asphalt shoulder first and trust me, the view of the pub isn’t all that good from face down on the tar. I shakily take the pic and we hurry home in the dark. Only to find…

Elvis has opened his car door and has the stereo blaring a selection of Baby Boomer tunes. Is it any wonder that Mona wants to go home? Using the Dolby method we turn on the TV and settle in for another evening of political espionage in Secret City. Elvis rocks on until 9:30 (half an hour after curfew) and although it’s warm we have to keep our windows closed not only because of the music but the smoke, as most camps have a fire. Loud music, smoke and bruising make for an uncomfortable night. I wonder if Old James Cook had this much fun!

We’re booked here for 6 days, will we curse it or grow to love it?